Over the last couple of months, you may have noticed that product lead times have significantly increased across all retailers of imported and made-to-order products. In an effort to be transparent with our customers, we wanted to provide you with some information in order to provide a better insight into what is currently going on in the world of global trade.

The pandemic, stockpiling of PPE, Brexit, cost increases, and other problems in the shipping industry have led to widespread delays in shipping schedules across the world, as well as rapid cost increases where many retailers have no choice but to pass that cost on to the consumer.

It all started around a year ago when the world went into lockdown and the container-shipping industry was struggling the stay afloat.

The Economist published a very useful article about the delays and huge cost increases in the shipping industry. It highlights how rising consumer demand and the limited supply of shipping containers are 'causing disruption on the seas'. The article details how container-shipping firms were forced to cancel sailings around a year ago when the world went into lockdown, leaving thousands of shipping containers stranded in European and American ports. After the initial shock of the pandemic settled and demand for goods began to rise, factories went back to full production and were left scrambling for shipping containers that were in European and American ports, rather than the Asian ports where they were needed.

This caused container shipping costs to skyrocket! We felt this impact on our business with shipping cost increases of over 500% - from around $2,000 to ship a 40-foot container to over $10,000. The chart below shows just how sudden the costs increased for businesses. 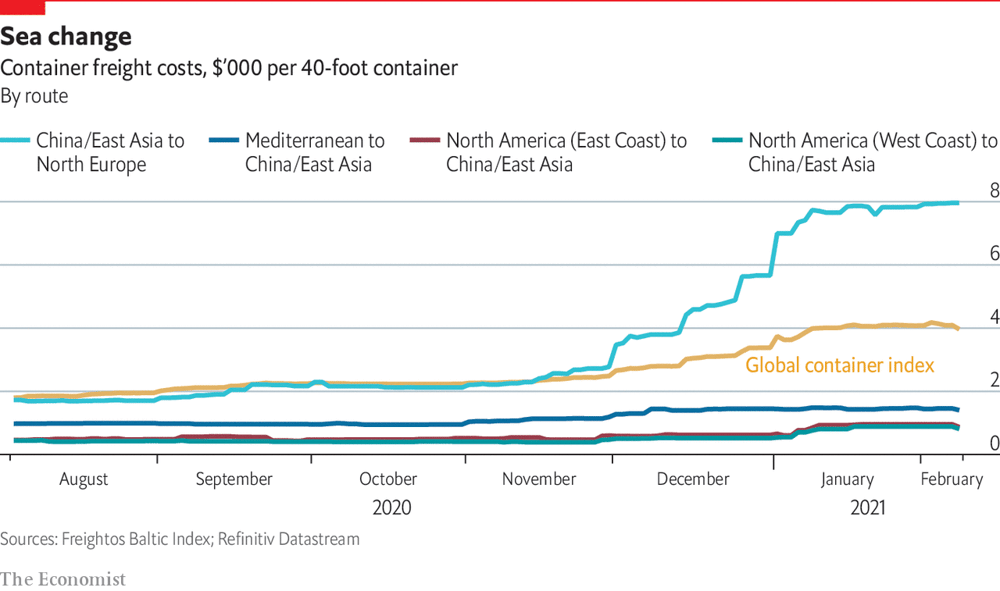 You can find The Economist article here: econ.st/2RldjPR

Leading up to what turned out to be the 'tipping point' after the initial lockdown. Another cause for delays earlier in the year was Brexit stockpiling which caused many delays from our European suppliers. The Guardian states that 'severe delays were caused as businesses try to get goods into Britain before a potential no-deal Brexit' at the start of 2021. This also led businesses and the Government to hold on to the very containers, full of products due to Brexit and PPE for the fight against the pandemic, that were required back in the global shipping system (source: bit.ly/3g5EDMl).

Another key reason for container shortages was the closure of French borders to combat the coronavirus around the start of the year. The Financial Times point out that 17% of British goods trade travels via Dover (source: on.ft.com/2QfnpRU). Whilst the media was focused on Brexit headlines, the result of containers being used for stockpiling supplies and being constantly delayed in transit was simmering, just waiting for something to unhinge what was already a delicate balance.

Our European suppliers struggled against the border closures and 10-mile long queues at the ports to deliver our products as fast as they could. Not only were they affected by border issues, but new customs paperwork and red tape caused a backlog which they managed to get through in good time. This not only affected deliveries but getting raw materials to the factories was also an issue which prolonged the delay! By working closely with our suppliers we now have improved processes and delivery timings that we can rely on.

Suez was just an episode

In recent news, the Seuz Canal received a lot of coverage when the Ever Given ship caused huge delays as it blocked one of the world's major shipping routes for almost a week. However, DW states that although the canal is reopened, the story isn't quite over.

Shipping experts told DW that ships will now arrive in Europe or Asia with a delay of one to two weeks, and that 'There could be further congestion there if too many freighters arrive in the major ports at the same time. The return trips will be delayed, and some will have to be canceled altogether' (source: bit.ly/2ONGHNY). This results in goods that are in Asian factories waiting for containers to become available and the delays growing worse.

In a recent BBC News article with the headline 'Shipping disruption: 'We're doing our best - but this is crippling', a BBC business correspondent interviewed a furniture business owner about the impact of the bottlenecks in the global shipping industry, the article goes on to discuss ongoing global shipping issues - read more here.

What we can do

We are taking measures in order to combat potential delays with our products and provide the quality of service that we are known for. We are making shipping arrangements well in advance, and ensuring that each container that we import includes a wider array of products to offer better product availability in case of another major delay, as well as being more efficient with which products we decide to ship. We want to be transparent with our customers which is why we are proactive in contacting customers about potential delays so that you are not left in the dark regarding the whereabouts of your furniture.

This blog post highlights just a few of the issues surrounding the global shipping industry, but we hope it provides a good insight into the escapades that created a bottleneck in the global supply chain and how easily a crisis can occur in an industry that operates on a knife-edge.

The processes we employ and relationships we hold with our suppliers allow our purchasing and delivery team to track shipments on a daily basis. This allows us to provide accurate delivery timing for 'pre-order' products that you can rely on when purchasing from Quatropi.